Since 2007, Meaford, Ontario has had its own International Film Festival, affectionately known as MIFF, which treats festival goers to “four nights, four films, and four parties” every Labour Day weekend. This year, the festival features works from South Africa, Serbia, France, the U.S. and Italy, as well as homegrown shorts by young Grey-Bruce filmmakers.

And as MIFF kicks off its seventh season, the festival has also launched a brand new website, developed by myFavoriteMarketer, which offers a rich source of information on this year’s films; films and special guests from years past; and an opportunity for more recognition of volunteers and sponsors. 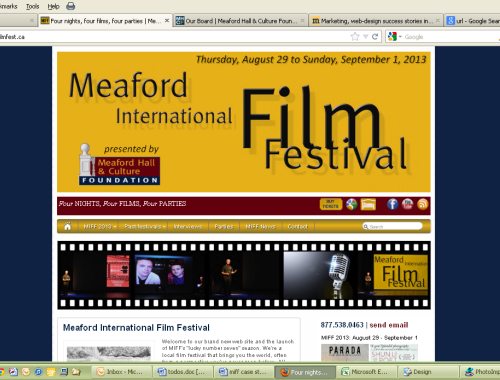 “I’m very excited about this new site,” says Artistic Director Christopher Thomas. “Not only does it provide a vibrant source of information, but it captures the vitality and vast scope that is MIFF.”

For its first six years, MIFF had launched a new website at a new domain each year, with details on the current year’s films and guests. This approach had its drawbacks. Beyond the additional work involved in setting up a new domain and new website every year, it diluted search engine rankings and confused ticket buyers. As old websites disappeared, links from media and other listings went bad, and any ranking the site had built up disappeared. Each year’s website had to start all over from scratch. Meanwhile, ticket buyers might assume from a dead link that the festival had folded, or if the old site was still up, they might happen upon the previous year’s films. It also made it difficult to maintain an ongoing archive of past films, special guests and other festival highlights.

Recognizing this, the Meaford Hall & Culture Foundation (MHCF) turned to myFavoriteMarketer to create a single, ongoing website which would consolidate the archives and establish a long-term Internet presence. We worked closely with the MHCF, who provided ideas, input, some design direction and graphics, and with Thomas, to fashion a user-friendly, information-rich site.

Among the new suggestions and features myFavoriteMarketer built into the website were.

Restoring and redirecting the previous year’s domain name. 2012’s domain, miff12.ca, had recently expired, but a number of media outlets, including the CBC, had links pointing to this URL. By renewing and redirecting the URL to the new website, we kept those links, along with any visitors who might find them.

Archives of all past films by year. MIFF’s archives demonstrate the festival’s character and quality. Now, visitors can scroll a touch-screen friendly carousel of posters to view a past film’s description and trailer by title, or they can choose a year, and link to any of the films shown that year. 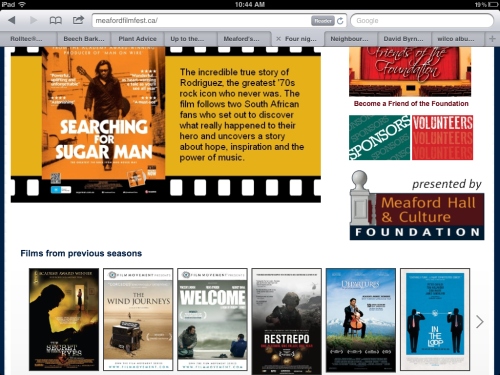 A blog. Built in WordPress, the new MIFF website allows organizers to post their own articles in any number of categories, including the overall “news” category. This allows for frequent updates and expanded search results for the festival.

Numerous videos. After all, this is a film festival. In addition to trailers for each film, past and present, the site features student videos, and at least one MIFF-produced video, for which we established a MIFF YouTube channel.

Sponsor recognition. A website offers the opportunity to recognize sponsors with more than a brief mention and a logo. MIFF’s website will feature a profile of each sponsor with a link to the sponsor’s website (if they have one.)

“We really appreciate your work and initiatives while developing our web page,” Rod MacAlpine, Chair Meaford Hall & Culture Foundation, told myFavoriteMarketer. “I like the idea of doing as much as possible to recognise our sponsors.”

While a general ticket button still links to this page, each film is now linked directly to the seat selection page on the Meaford Hall website. (This required myFavoriteMarketer to take a quick peek under the hood of the ticketing utility, but it makes for a much more enjoyable user experience.)

And of course, the website is mobile-friendly and “responsive” (meaning it will quickly adapt its layout to tablet and smart phone displays, including resizing video thumbnails and re-positioning images and sidebars.)

“A sincere thank you, Vic,” says Rod MacAlpine. “I work in the world of Internet in real estate and I see and use many web pages. The MIFF website is top quality and very user friendly; the work you have done for us is terrific.”

Artistic Director Christopher Thomas is also pleased with the result. “I’ve always said that while the films are the corner stone, MIFF is truly a festival and this site reflects that. The experience and the product surpassed all my expectations. Thank you.”

Discover six simple tweaks you can make - by February 13 - to increase leads from your website.
&nbspVic has worked on several of my websites for over five years. Websites include our Canadian and US Moxie Trades websites in French and English. Vic also created our online directories; Tradeswomen Directory and Moxie Marketplace. Vic is always available for small and large projects. When there is an IT crisis, he is always there […]
Marissa McTasney, Owner, CEO, Moxie Trades
London, Ontario
Canadian ecommerce grant helps businesses in Owen Sound, Collingwood, Ontario area