When Fionnuala Sparling handed me the little slip of paper at the community event we were both participating in, it seemed like a charming, low-tech – old fashioned, you might say – way of getting the word out about her project. Two months later, those slips of paper (along with the more conventional promotional and marketing methods of our day and age – such as Facebook and Twitter) have generated $9,687 for Fionnuala’s cause.

Fionnuala is the Chair of Meaford’s Golden Town Outreach (GTO), which operates the community’s food bank. Like many food banks in the country, GTO faces a crunch when it comes to operational expenses; people often donate food products, but storage, distribution and other needs require cold, hard cash. Kraft Food for Families provided an opportunity to raise some of that money, and GTO enthusiastically took on the challenge.

As participants, they would receive 50 cents for every sign-in at the Kraft program’s website. Supporters could sign in once a day from November 1 through December 31st. Once each province’s limit of $20,000 was reached, an additional competition would ensue. The organization in each province to receive the most number of sign-ins by the end of December would receive an additional $5,000. 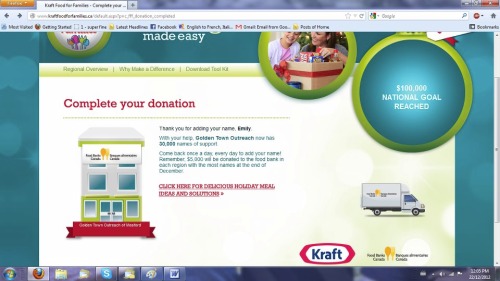 Winning meant quickly building a network of people motivated enough to sign in as often as possible. How to do it?

Kraft provided suggestions, and GTO jumped in to social networking – counting on experienced volunteers to set up Facebook and Twitter accounts and acquire followers; fired press releases out to local media – which generated a front page story in the local daily and a number of interview clips on local radio; and sent emails to area governments, the Chamber of Commerce, and other organizations.

And then there were those little slips of paper.

“They were kind of like business cards,” says Fionnuala. “Wherever we went, we had them in our pockets – and we just handed them out.”

I received mine on Hallowe’en, a day before the contest began. A couple of days later, I sent out a small blast email to some local folks. That same day, I received two different blasts from others. And as Meaford quickly took the lead, we kept track – noting when Sudbury made a sudden surge and reminding people to keep participating. “I think that’s the kind of thing that got it going,” says Fionnuala. “I think there was a lot of people doing that kind of thing.”

With a solid incentive to participate – a worthy cause – and an enthusiastic grassroots mix of homespun, traditional and Internet marketing and networking, the small community of Meaford received 33,813 sign-ins and took the lead over much larger cities to claim the bonus donation.

“The support we’ve received from this community has been remarkable,” says Fionnuala. “We’re a small organization so these funds and increased awareness will make a significant difference in how we’re able to serve our community. Some of our initial thoughts on how we’ll use the money include increasing our shelving capacity, supporting our transportation costs and even possibly purchasing a new refrigerator or freezer.”

Discover six simple tweaks you can make - by August 16 - to increase leads from your website.
&nbspVic took my dense prose and made it accessible. Those in my area looking for services like mine find me on Google and end up spending several minutes and browsing several pages and then actually calling me. That never happened before. Since I’ve had this site, I have stepped up marketing contacts with potential clients knowing that if they take the time to visit my website they will be mightily impressed. I can’t say enough to recommend My Favorite Marketer.
Bill Monahan, Homebuttons
Meaford, Onario
Digital Mainstreet offers grants and support for ecommerce and website enhancement in Collingwood, Owen Sound area